Machine Learning - Based Personality Analysis of a Failed Finance Minister

Currently there is an ongoing media frenzy in Greece, following the publication of a book titled "Adults in The Room". First off, it is not what you think it is; it is rather the memoirs of Yanis (with a single "n") Varoufakis who used to be Finance Minister of Greece from January to June 2015 - and whose appointment even made the Hacker News frontpage. Between its pages one can read a lot of "juicy" details from the numerous "critical Eurogroups" he was present, along with quite a few private conversations he had with the Greek PM and other members of the cabinet. During Varoufakis' short - but dense - tenure his mere presence and stylistic choices shocked and awed the masses making him a celebrity overnight. It was also during that period that the Greek drama escalated to an unprecedented level which eventually peaked with a call for a bailout referendum

Many of the details shared in the book have now made the headlines and gone viral on the Greek web. As I kept seeing screenshots and excerpts being shared on social media and being a geek and data junkie myself, I thought there must be a better way to gain some insights on the book without actually reading the whole thing. Hence, I set out to do some quick Natural language processing (NLP) on the book's text to see if I could find anything interesting.

In this context one might expect that interesting refers solely to policy choices and outcomes. However, this is not the case here (or at least I do not agree). I do believe that politicians themselves are also first-class citizens in the democratic process. After all, names are what we see on the ballot. In regards to that, the feeling that I - as a citizen - got during his tenure was that Varoufakis' primary objective was not doing any real policy work, but rather to craft his own persona by capitalizing on the spotlight offered by his position. I was thus curious to see if and how this hypothesis of mine was reflected in his memoirs.

Now, the canonical disclaimer one adds here is that this post does not intend to be political, is for presentation purposes only and so on. In this case this is half true. Yes, this is a fun post and analysis I did by re-using some code and plots I had available from other projects. Yes, this is in no way a full-fledged and in-depth analysis of the book (that is to say: if one wanted, one could find many loopholes in the very simple methodology). Obviously it is neither a full psychoanalytic profile of the person - nor it intends to be, although I have successfully used similar methods for profiling customers in marketing business cases and so I am pretty confident with the approach. Having said these however: the author is a politician (unarguably not a successful one), his book describes political experiences and being a Greek citizen myself this post is - almost by definition - political thus I am highly biased on the subject (in case you didn't notice that from the title). In particular, in my not so humble opinion, Varoufakis' tenure was purely a tragedy both for the Greek society in general and the Greek economy in particular. Its consequences are still evident not only at a macro-economic level but also on the day-to-day lives of the Greek people. For example, his - and his fellow ministers' - shenanigans resulted in the introduction of capital controls in Greece. There is no point getting into more details here, but I mention this for the reader to bear in mind that although data and even analysis results may be interesting and even objective, their interpretations can be highly subjective and prejudiced. The data and results are there and one can freely interpret them.

If you think that this approach is un-political or even pointless, you can simply stop reading. I have to disagree however. Politicians (and ministers in particular) are not simply appointed executives tasked with the duty of enforcing laws passed by the legislative branch; even if this is - in constitutional terms - their key responsibility. 1 They are also responsible for running the day-to-day management of the state. They are also supposed to reflect the will of the people and have the people's best interests at heart. The last point is crucial as it essentially means that we should not judge politicians just by their policy work but also try to read behind their incentives and interests. That is the only way people learn from their own mistakes - after all Varoufakis' was the highest-voted MP in the Greek parliament. It is also the way to avoid a Messianistic view of politics - which in my view Varoufakis' election was a typical case of.

On to the analysis now:

The first thing one typically does in such scenarios is counting the frequency for every word mentioned in the book. After parsing the text and doing some cleaning with NLTK (i.e. removing punctuation, common stopwords etc.) I plotted the frequency counts and got the following results:

Boy, was this unexpected! Of course not! Not at all unexpected for a book subtitled "My Battle With Europe’s Deep Establishment" written by an author whose primary objective seemed to be polishing his own narcissistic image rather than doing any actual policy work. Kidding aside, the result makes perfect sense given that the book follows a typical memoirs prose describing the author's own experiences and dialogues. But still, the fact for example that the word "the" which is the most common in the English language is only third in Varoufakis' book, whereas Varoufakis' favorite word is only tenth in the English language is worth noticing.

Another interesting observation is that if we just read the twenty most frequent words sorted in descending order, we get:

Funnily enough this also matches the narrative the greek government and Varoufakis' have been using for the last couple of years:

"We tried our best and we would save our people, but the establishment (ECB, IMF, Eurogroup) did not let us"

To be precise, Varoufakis' narrative is slightly different from the government's one as he usually says:

The next step was trying to extract some insights for Varoufakisp' personality based on the Five Factor Model. For this I used the handy Watson API coupled with NLTK for some pre- and post- processing for cleaning purposes. According to the the FFM a person's personality is a mix of five descriptive individual traits - dimensions. Here is what each of these traits means:

Here are the results I got for Varoufakis' book (the scores below are percentiles scaled to %). 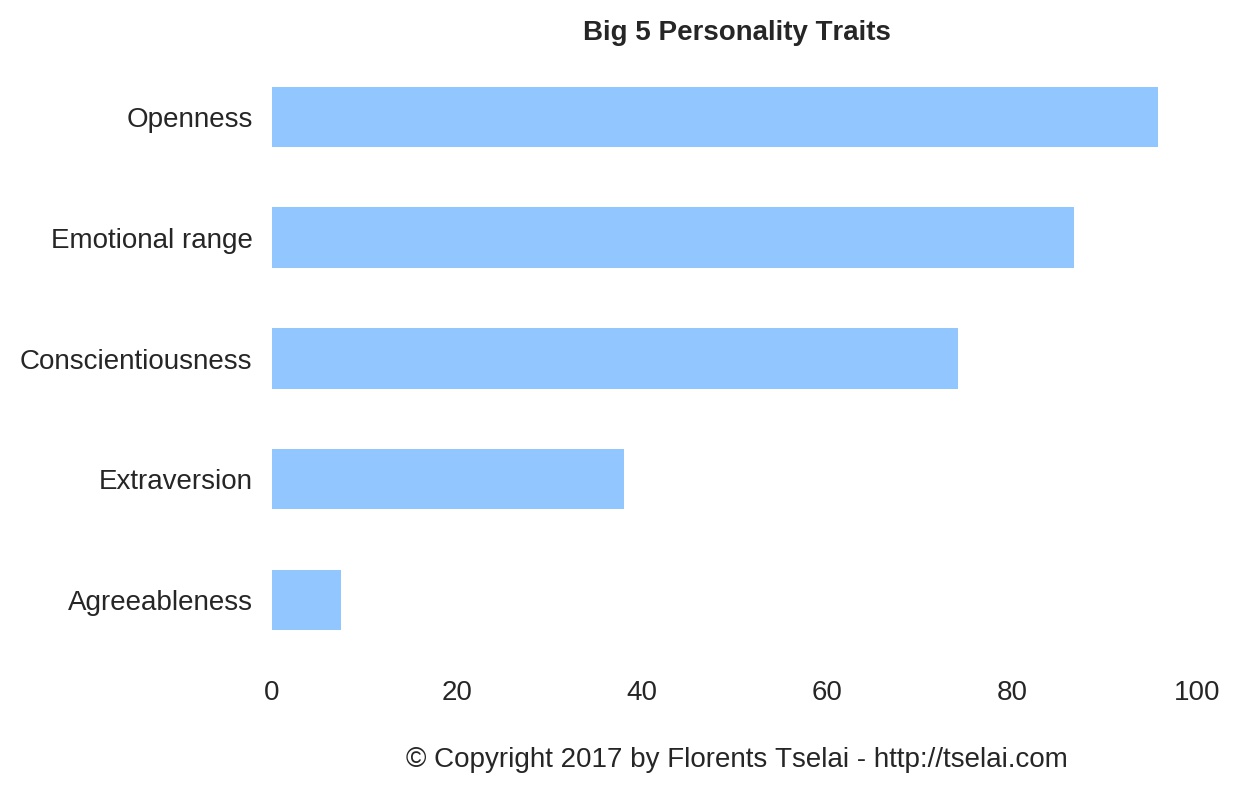 As one can see, he scores pretty high on Openness, Emotional range (Neuroticism) and Conscientiousness, is somehow below average on Extraversion, while he nearly-scratches the bottom on agreeableness with a whopping 7%! Let us take a moment to appreciate the accuracy of the algorithm here: In my view, the extremely low score on agreeableness makes perfect sense for someone whose first joint press conference with a European leader ended like that. It also matches the never-ending aggressive tone and attitude he had towards any other party sitting across him on the table of negotiations.

To have a more detailed view, let us break down the facets (sub-dimensions) of each trait (top-level dimension):

On openness the results are pretty straightforward and I would not argue about them. I agree that he is indeed a highly intelligent and educated person. 2 I mean, who would even argue with the fact that he is a highly adventurous person 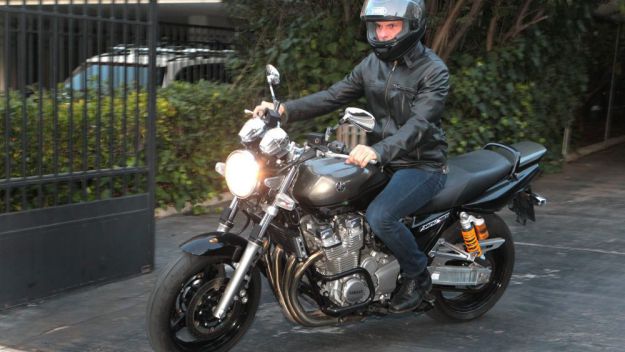 who also has a keen interest for the arts!

On conscientiousness I tend to agree with the results as well; first off, I think that even the other European leaders can vouch for his lack of orderliness - actually I remember journalists describing him going to Eurogroups completely unprepared and while the other people present used to talk based on numbers and spreadsheets, Varoufakis would speak his part based on some vague and fluffy texts full of pseudo-political arguments . I also got the same feeling every time I watched him speak on the Greek Parliament. As for cautiousness and self-efficacy I think the results of his tenure speak for themselves. Note, that self-efficacy is a synonym for self-assurance and has nothing to do with effectiveness. I the end his over-reliance on his own abilities packed with his lack of cautiousness is what costed the Greek economy the most as the other EU leaders called his bluff.

On extraversion I cannot give an informed opinion as I do not have real social interaction with Varoufakis. I would also do the same for his degree of neuroticism although I have to say that from what I saw on TV he was not the kind of guy who was too prone to worry or susceptible to stress - as far as a politician's life is concerned.

On agreeableness - as I mentioned earlier - I think the results are pretty much spot on. His lack of modesty and cooperative spirit were profound to pretty much anyone. Finally, to close on a positive note - and in the light of his trust, altruism and sympathy scores : regardless of his political actions I have to say that socially I could even like the guy.

If one would like to make some different interpretations on the results, detailed descriptions for the different percentiles and interpretations of the model can be found here. Please feel free to send any feedback on the simple - or even naive - methodology or ideas on different perspectives (in terms of analysis). I intend to do similar and more sophisticated analyses for other books, especially auto-biographies (which I am a huge fan of).